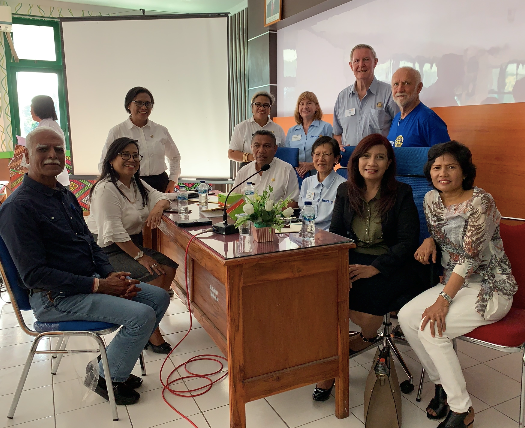 In February 2020, a small RAM team led by Dr Jenny Kerrison (Rotary District 9830), the National Manager for RAM, visited West Timor to conduct a community assessment in four villages. The Team visited wo villages in each district of Malaka and Belu. See map 1 below.

The community assessment component was funded by a Rotary Club of North Hobart District Grant D9830 and RAM Australia. All Rotarians were self-funded volunteers and were responsible for funding their airfares and accommodation. The Team was made up of four RAM Australia Rotarians, one Rotarian from the Rotary Club of Kupang Central, and two non-Rotarians (one local Project Manager, and one NTT provincial health malaria programme staff). The Rotarians were from the RAM network from Eastern, Western, and Southern Regions.

The community assessment’s goal was to identify the communities’ needs for participation in malaria elimination at the border districts of Malaka and Belu. The target communities assessed were the villagers and the government’s district malaria service providers.

The villages were sampled on the criterion that they had high number of malaria cases. Convenience sampling of households and village community members was undertaken. All participants were volunteers and their participation was organized via the NTT Provincial Health Office and our Project Manager several weeks before our visit. We also conducted interviews with key malaria programme officers located at the Community Health Centres in the districts.

All participants provided informed consent prior to being interviewed. In addition, consent was obtained from all participants for use of photographs and videos taken during the interviews.  Three sets of questionnaires were developed by the RAM Team for data collection from: (i) the households (built environment); (ii) Village Head and Community members; and (iii) Community Health Centres.

Overall, our Team interviewed 121 participants. The participants were: 29 staff from community health centres (Puskesmas); 72 community leaders and members; and 20 heads of households.

At each location before moving on to the second District, our Team presented the findings to the District Health Office. Following the presentation, we held a brainstorm session in two separate groups of District Health staff and Rotarians, respectively. This process was important and resulted in greater understanding of the needs and engendered ownership recommendations.

Good progress was made in malaria elimination in district of Belu. In general, the interviews with village heads and members revealed that the villagers were knowledgeable about malaria and cared about their communities. In district Malaka, villagers feared getting malaria. In several homes, they had limited protection from the disease. Many houses did not receive any or sufficient number of long lasting insecticidal nets (LLINs) for all household members. Many of the houses and environment did not help keep the villagers safe. Insect screens over window were not seen during our visit. In some locations, there were large stagnant pools of water. The villagers reported crocodiles living in the pools and thus, clearing the pools was not possible. Malaria was a problem at these villages. The team also identified that program planning and procurement were needed at all service levels. There were missed opportunities for malaria prevention, early diagnosis and treatment because the malaria programme staff did not test all patients with fever when they first present to the CHCs. This policy is now changed. The frequent staff changes at the community health centres (CHCs/Puskesmas) contributed to a lack of experience and knowledge in the malaria programme and was one of several barriers to quality malaria services.

On a positive note, the assessment team found that there were opportunities for the district health team to work collaboratively across the many sectors to eliminate malaria in West Timor.  The team also found that the villages visited were enthusiastic and want to participate in malaria elimination projects. The malaria programme staff have local knowledge of the people that could be used to help with malaria elimination in the villages. Lastly, cross border collaboration between NTT province and the border municipalities in Timor Leste is an opportunity to accelerate malaria elimination in both locations.

Thank you to our donors the Rotary Club of North Hobart, Rotary District 9830 Grant; and by the Rotarians Against Malaria (RAM) Australia, for funding the community assessment component of our RAM small team’s visit to West Timor.

We also wish to thank Dr Domi, Head of NTT Provincial Health Office, and Dece Mery Pay, the NTT Province malaria programme staff for organizing meetings for us in the districts Belu and Malaka.

Thank you to our amazing RAM Team who worked really hard prior to and during the visit. In each district, the Team held a workshop with the District Health malaria programme at the end of data collection, to review jointly findings and identify solutions to problems. A final presentation on the Team’s findings were presented to Dr Domi, the Head of Provincial Health Office, and to his staff.