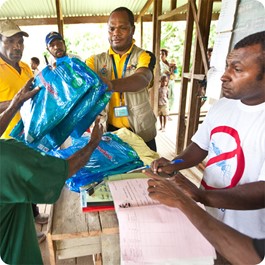 The Covid19 mayhem means that Rotarians Against Malaria has their work cut out for them in many cases. Fortunately, with the assistance of Rotary Clubs, Districts, and the general public, we are “up to it.” 1.5 million malaria cases and 7.6 million malaria-related deaths have been prevented since 2000 (World Health Organization, 2021).

Dr Jenny Kerrison reports that there will be a one-off stipend of $29,500 for a Papua/New Guinean scholar to complete the final year of their PhD. Students are being interviewed as we speak.  This is wonderful news as PNG has a high incidence of Malaria.

Dr Bruce Anderson demonstrated that the role of RAM is critical as there have been many research developments recently. These are on the RAM website, Rotarians Against Malaria Australia – eliminating malaria (rawcs.com.au), and people can jump online and find their topic of interest. Some new findings are that Covid deaths have surpassed those from Malaria in Angola and many other countries. Malaria, however, is ongoing and needs publicity. There needs to be much better collaboration between aid programs using the commonalities such as housing, water supply, insect control,  screening, community development, and health promotion.  No double or none!!!

Rapid tests for Falciparum Malaria do not always pick it up, leading to asymptomatic carriers moving around much like those with Covid 19.  The rapid testing formula needs to be reassessed, and re-developed.

Glyphosate for those who use Round Up can increase mosquito susceptibility to Malaria parasites leading to increased transmission (Smith et al., 2021).  As if Round Up did not cause enough problems already.

Adam Bartlett from RAM, Solomon Islands reports that they are working on an Active Case Detection (ACD) project in the settlement of Mataniko which is along the banks of a stagnant river in Honiara. The project will commence soon with the training of health workers beginning in the next few weeks. Malaria is increasing in the Solomon Islands due to the government focussing upon Covid 19, and limited resources.  Honiara City Council RAM-SI have been collaborating with the Honiara City Council Malaria team and discussing the gaps that can be filled.  Aha, collaboration is catching.

Ms Andrea Grosvenor from the RAM Eastern Region reports that in Rotary District  D9705, the Rotary Club of Ginninderra has completed two District Grant projects in Vanuatu based on the control of mosquitos and other insect pests. Project one was the $10,000 purchase of equipment and chemicals to control flying insects and mosquito larvae. The Club sent Sumilarv tablets to the Ministry of Health for larvae control in the Port Vila water supply.  Equipment, Sumilarv and other chemicals were sent to Guau Island, Vanuatu through contacts developed by a Club member. You never know where people will ROCK up. Sumilarv which is based upon Insect Growth Regulator Pyriproxyfen, has very little toxicity to humans and other mammals, but kills mosquitos in the tumbler stage before they can breed. Sumilarv has been approved by the World Health Organization for use in potable water (Sumitomo Chemical Company).

Project two was a $7,500 purchase of supplies to build two village waste disposal facilities on the Island of Guau. Kills two birds with one stone as sanitation will improve and several species of insect brought under control. The products were able to be purchased locally in Vanuatu which is a plus. The facilities will be built by local volunteer labour. HOWZAT!!!

The Rotary Club of Queanbeyan, in collaboration with RC Kupang Central (RCKC), is sponsoring a project with a D9705 District Grant to help rebuild facilities in West Timor.

The work is being managed by RCKC and has commenced already. Sounds like they will be in contact with Peter McKenzie’s mob as well.

Peter McKenzie from the Western Region reported that West Timor-meetings are  productive, and staff are now being  selected for the program. $62.5000 from Rotary International is available and can now be used in West Timor. Other Rotary grants are also ready to go.

Virginia Turner reported on the RAM Primary School Video Competition and showed a You Tube developed by school children in Columbia. The You Tube is very informative and fun. The large syringes for taking blood are not normally used in Malaria screening but they are a standout, the producers were just checking that people are on the ball.  The You Tube was researched by Rotaractors in Columbia and is a valuable contribution to Malaria health education. The school wins $500.00.

Netania Lim-is organising marketing for the RAM Virtual Conference, adding blog posts to the RAM website, contributing to the Regional Supervisors’ Action Plan, and collaborating on further steps to be taken with RAM Australia marketing and key messages. Netania has done a fantastic job using a planned, strategic approach to develop consistent and branded posts that entice engagement.

Dai Mason-reports on the Global Fund and RAWCS-RAM Platform, which is developing partnerships with corporates and philanthropists, mainly in the USA, but Australian  Rotary Clubs are encouraged to do the same to fight Malaria. The goal is to finish the fight against Malaria in the Western Pacific Rim. The Finish the Fight Platform aims to raise US$12,000,000, and at the completion of the program, the platform can be used in other countries. No need to completely reinvent the wheel.

There will be a Malaria Congress in Melbourne on May 25th-26th, 2023 prior to the Rotary International Convention also taking place there. This means that us Aussies can jump in the “Holden” and go. Contact has been made with the Burnet Institute, Malaria Partners International, RAM-Global and the Global Health Alliance to inquire into collaborations (there is that word again) for the Events.

Ms Gloria Hargreaves-from the Southern Region and the Rotary District 9910 NZ Global Grant –End Malaria in Vanuatu for Good is chuffed to report that two Malaria activities have been completed. Dr David Zinyengere conducted refresher training for two master trainers in Vanuatu. He also developed valuable training modules as a component of this activity. The next step is the training of local trainers. Ten sprayers and attachments have been purchased and shipped to Vanuatu. The Southern Region and New Zealand will continue to raise money via https://donations.rawcs.com.au/104-2019-20  for the Program in Vanuatu.

The contributions made by Rotarians, Rotary Clubs and general public is greatly appreciated and is saving lives worldwide.